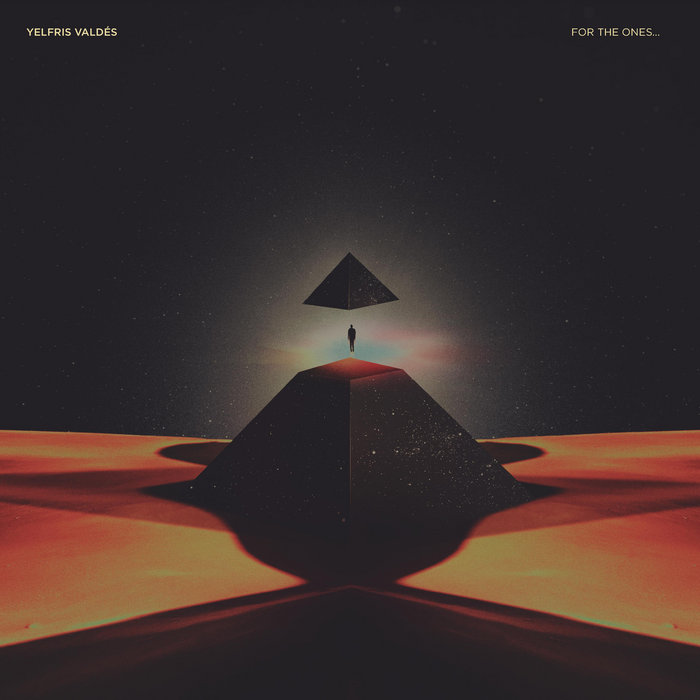 topsycat this music is like a funnel to infinit spaces with sounds full of tension and at the same time relaxing in a paradox way. I like to listen, it widens the soul.
Favorite track: Aceleyo Aña.

sumajyragg On my ear?
This is a retro-futuristic transcendent propulsion towards that final feeling which arrives abruptly; shaking you, reminding you, that its ancient architecture has been there all along. Favorite track: Maktub Ft. Simo Lagnawi.

Bob Hill Illicit Grooves This album is a must have. A real case of 'you need this'. Wonderful jazz combing beats and afro-cuban rythms and soaring melodies. There is a real atmosphere throughout this album. A strong contender for the Favourite Album category in The Illicit Grooves Annual Awards.

'The Incredible Afrocuban Trumpeter player... Yelfris Valdes, sounds like his horn could be made of glass!' - Mary Anne Hobbs – BBC 6 Music

'Yelfris is the don! he has an ear for music like none other & he’s one my favourite players' - Quantic

'Yelfris is a special cat. He’s an artist who looks to find his own unique voice whilst sharing a respect for the traditions and forbears who brought the music to where it is. In the music you sense a deep love and connection to an ancestral domain whilst his approach and delivery maintains a distance ahead of the status quo, always forward looking and a moving reflection of his generation.' - Chris Philips, Head of Music, Jazz FM


After the success of his first EP ‘The World of Eshu Dina’ last year, trumpeter Yelfris Valdés debuts his new project ‘For the Ones…'

For this record Yelfris employs an adventurous and experimental shift in his composition, drawing on his classical training and love of jazz whilst at the same time delving further into the world of electronica, gaining inspiration from artists like Jon Hassell, Bonobo and Aphex Twin resulting something truly unique:

“For this album, I worked deeply and meticulously to find a more layered sound including a trance feeling with grounded rhythms”

Yelfris has deliberately connected with his Yoruba religion and its shamanic chants, subtly infusing those deeply personal elements with electronica and live instrumentation creating a beautiful pulsating soundscape. In purposefully mutating the acoustic sound of his trumpet he adds depth without losing his power and tenderness.

‘As a Santero my beliefs in the Orishas from the Yoruba religión have helped me to improve my faith in the gift of life and the things that really matter to me: family, spreading of positive energy and actions, and the Truth, as ultimately this is what we need to grow. Only a few of us have been given this knowledge and as a Cuban musician living abroad I feel it is my duty to spread this message and expand it in a new direction, connecting with a wider range of musical styles.’

The album opens with ‘Canto Congo’ an acapella that pays homage to his Central African origins.

The lead single ‘Aceleyo Aña’ refers in Yoruba to the ‘Deity of drums’, a beautiful up-lifting hypnotic piece setting the tone for the rest of the album.

Yelfris teams up with Moroccan Guembri Master Simo Lagnawi on Gnawa influenced ‘Maktub’ and incredible voice of Senegalese singer Modou Toure in a highly spiritual call to his forbears on ‘Ancestry’.

The rhythm section has all the Latin and African influences of traditional Cuban music but fused with the complex harmonies and electronics, it develops into an unexpected place becoming the new Yelfris Valdés stamp on contemporary music.

The meaning behind ‘For the Ones..’ is exactly that: ‘this music is for anybody who wants to experience this new journey, for those that don’t put limits to creativity and empowerment.’

“After a long career (20 years) and touring with some of the biggest music icons, I can say that my voice is way bigger and richer now. This album is a mixture of my Cuban heritage, my travels and my life in London. If I was still living in Cuba or anywhere else, I could have never made an album like this and that is My Truth. I live in London but I am Cuban.”

The artwork is an original creation of Spanish artist Fran Rodríguez, who said:

“This design is strongly inspired by altered states of consciousness, by mystic and transcendental experiences that you can achieve in many ways: through music, meditation, love, psychedelic substances, etc. The design represents that exact moment when you cross over to another level. The enlightenment, the transcendence”.

Yelfris is a Cuban artist, composer and trumpet player, who mixes the latest electronic technics with the spiritual chants and mystic rhythms from the Orishas

Bandcamp Daily  your guide to the world of Bandcamp

Featuring appearances from Kari Faux, Bluestaeb and and interview with NY-bred artist Wiki